Showing posts with the label Bad News Tinubu
Show All 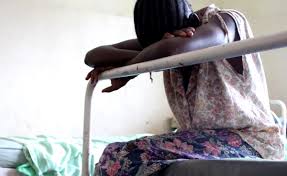 The Lagos State Police Command has arrested a man, Timothy Idowu, for allegedly raping his 15-year-old daughter in the Aradagun, Badagry area of the state. File photo According to Punch, the matter got to the attention of the police after the victim, Victoria (pseudonym), packed from her father’s apartment to put up with a family friend in the Ikotun area. He had travelled for a prayer meeting on the day his daughter fled home. It was learnt that Victoria, who had been kept in government’s custody, was raped while her mother was bedridden. Idowu was arrested on Thursday, June 23, by the Badagry Police Division. A social worker, identified only as Ibrahim, who reported the matter to the police, said the victim fled to her aunt in the Ikotun area. He said:   “The victim fled to a relative, who is her aunt in the Ikotun area. The aunt thereafter contacted our organisation. The case got to my attention last week. I reported the case at the police station in B
Post a Comment
Read More »

Two elderly women died on Saturday in a violent struggle for Ramadan gifts distributed on behalf of a former Lagos State Governor, Asiwaju Bola Tinubu, at Onikan Stadium in the state. SUNDAY PUNCH learnt that a middle-aged man fainted in the commotion, while several others were injured during the distribution by the Iyaloja General of Nigeria and Tinubu’s daughter, Mrs. Folashade Tinubu-Ojo.
Post a Comment
Read More »
More posts